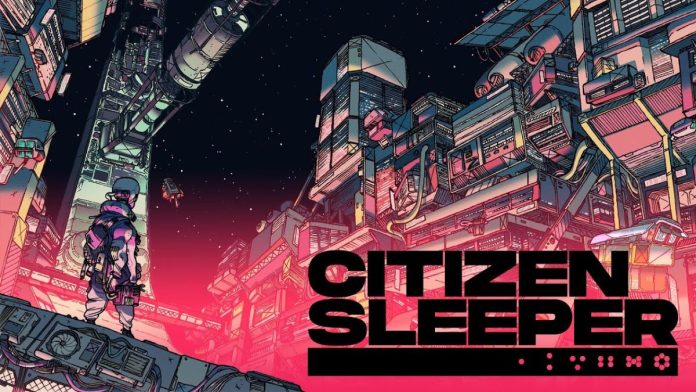 Citizen Sleeper is designed to tap into the “one more cycle” mentality that keeps players locked in well beyond the point they swore they would go to bed.

As a longtime Tabletop RPG player, I have always gravitated towards narrative experiences in gaming. I love a good adventure game or visual novel, but have often found the moment-to-moment gameplay underwhelming and will quickly bounce off a game if the narrative doesn’t grab me.

While adding an element of randomness through dice rolls is nothing new, the way it is handled in Citizen Sleeper puts just enough interactivity onto an otherwise straightforward visual novel to make it feel fresh.

At the start of a cycle, the game rolls a number of dice dependent on your current “Condition” score. Have you been keeping up with your required maintenance and staying well-fed? Here are five dice to play around with. Has a series of bad rolls left your coffers empty and your stomach growling? Chances are the wear and tear of the past few cycles are going to leave you with one measly dice with which to claw your way back from the brink.

The night I picked up the game, I was sitting in my office at 9:00PM with a ton of work left to do for the evening. I booted up Citizen Sleeper as a treat to myself, a nice thirty minute break from the stress of working on more pressing material.

The beauty of Citizen Sleeper is that a single cycle can last you no more than two or three minutes if you just run a few odd jobs to gather some cash or information while waiting to stumble into the next narrative thread.

By the end of my third cycle on the station, my stomach was empty and deterioration had really begun to effect my cognitive functions. I was down to two dice a cycle and no cash, food, or stabilizer to keep me from my inevitable demise.

That’s the beauty of Citizen Sleeper’s simple gameplay loop. A run of bad luck can turn around very quickly, and before you know it, you may find yourself awash in resources and flush with your choice of side stories to investigate.

In order to progress events, you slot your dice into nodes located around the hub station of Erlin’s Eye. The higher the result on a given die, the more likely an action is to succeed. A 6 is always a guaranteed positive outcome, and a 1 is most likely a negative or neutral result.

There are some minor TTRPG character customization options which result in +/- modifiers for rolls or that allow you to use resources in unintended ways, but these systems are light and unobtrusive, and by the end of the game I had unlocked nearly every ability.

However, in the early cycles, when your average modifier is a +0 and a -1 is not uncommon, it can be a harrowing experience to wake up for the day with a handful of ones and twos. So when I began Cycle 4 with two 6s in my pocket, I made sure to put them to good use.

You see, during these early days, I had only met a single individual on the station willing to help me out. Dragos, the surly salvager who found me and offered me an old shipping container to stay in, had pointed me in the direction of some work I could take on at the station, but my early rolls had resulted in few successes and a body on the brink of failure.

Then on Cycle 4 I spent my dice to gather information from a local marketplace. The result of these rolls were a sea change for my Sleeper and set her on an run of success that would carry me deep into the end game (even if this would be far from the last time I would be salvaging for scrap and begging for food to prevent me from falling apart at the seams).

After my first roll, I uncovered the whereabouts of a local food stall that specialized in mushroom based dishes of surprising quality. The proprietor, a jovial spacer named Emphis, was willing to exchange my first meal for a story. So I told him a bit about what it was like being a Sleeper and he offered me a nourishing meal in exchange.

Over the course of the next six hours, I would make these little exchanges with Emphis a priority of my time on Erlin’s Eye, and while our time together would ultimately be brief, our friendship left a lasting impression on me.

With my stomach full and hope at an all-time high, I took my chances on running another search through the marketplace. This time, I came across a local physician who took an interest in me.

As an inorganic Sleeper, traditional medicine isn’t enough to prevent bodily deterioration, and it turned out that the proprietary stabilizers used to keep Sleeper’s active would be hard to come by on Erlin’s Eye. Despite this, Sabine was willing to lean on her contacts to help me out, and a couple of rough cycles later, I was patched up and ready to work in earnest.

It is these little surprises that kept me locked into the world of Citizen Sleeper long after I had seen the first of the game’s eight endings.

These runs of success were never sustainable for more than a few cycles, and the constant battle of whether to spend dice eating, working, repairing, or advancing a character’s story meant that every choice had weight and each cycle felt unique.

My plan to set aside the game at 9:30PM was a failure, and when I finally turned my attention to the clock it was well past 1:00AM.

It is hard to talk about what makes Citizen Sleeper so unique without spoiling too many of its surprises. For being largely the work of one developer, Gareth Damian Martin aka Jump Over the Age, the depth and complexity of this narrative is something to be marveled at, and I haven’t even mentioned the haunting and emotional lo-fi soundtrack of Amos Roddy that accompanies the story perfectly.

It may sound hyperbolic, but the combination of stellar writing, exceptional character portraits (courtesy of Guillaume Singelin), and a truly moving soundtrack result in some deeply affecting moments. On more than one occasion I found myself tearing up as my favorite characters’ arcs came to a close.

I will never forget the time spent working odd jobs with Lem and helping him look after his daughter, Mina, or how the commune leader Riko taught me to look for beauty in a handful of spores.

Citizen Sleeper thrives in the rare moments when the grind for survival abates just long enough for you to catch your breath, when you are no longer forced to make the choice you need to make, and you can instead take the path you want.