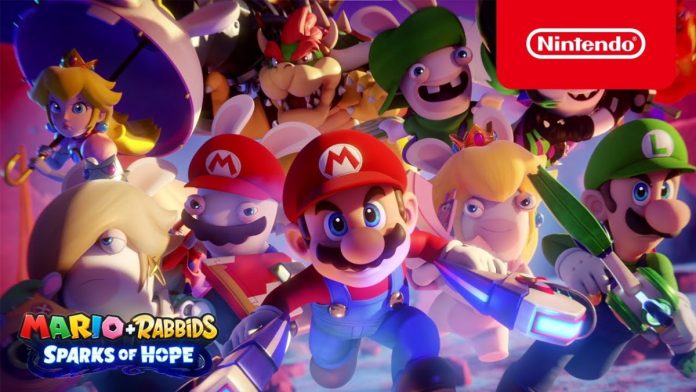 Ubisoft made news for all the wrong reasons this week.

The French video game publisher saw its shares take an absolute nosedive after the company cut its four-year revenue targets. Ubisoft says that sales during the holiday season, particularly the last weeks of December and the beginning of January, “have been markedly and surprisingly slower than expected.”

In the company’s January Financial Update, Ubisoft singles out Mario + Rabbids: Sparks of Hope for its “underperformance” during the holidays. To be clear, Ubisoft hasn’t released official sales numbers for Mario + Rabbids: Sparks of Hope — just that “despite excellent ratings and players’ reception as well as an ambitious marketing plan,” the game didn’t perform as well as expected.

But does that mean Mario + Rabbids: Sparks of Hope is a failure?

Landry — a friend and guest of the Nintendo Watcher Podcast — outlines Ubisoft’s two biggest problems in less than 240 characters.

Ubisoft didn’t sell as many Mario+Rabbids: Sparks of Hope as they speculated for reasons. 1) the first game came out on Switch when there was no other Mario title on the Switch outside of MK8. 2) I bought the first at full price and a year later it was 13.99 on the eshop.

(In 2017, Mario + Rabbids: Kingdom Battle also gave us the best-looking Mario game we had ever seen.)

By 2022, this late in the Switch’s lifecycle, players just have more options. We haven’t had a new Mario game in a while, but you can’t say that the plumber is underrepresented anymore.

To think that Ubisoft’s second Mario strategy game was going to light the Switch gaming world on fire just isn’t based in reality. On top of that, even with the power of Super Mario behind it, Ubisoft is still trying to sell a turn-based strategy game. Strategy games appeal to a niche audience, which was already pretty well served last year with strategy games. Just last year, we had Triangle Strategy, Tactics Ogre Reborn, and The Diofield Chronicle land on the Switch, all more traditional strategy games that, I think, appeal more directly to that niche audience.

Landry’s second point is a good one, too. We’ve all felt that Ubisoft burn. You buy a game at full price, and a few months later, it’s in the (digital) discount bin for a fraction of what you paid. Ubisoft gives players zero incentive to buy its games at release. Mario + Rabbids: Kingdom Battle is almost always deeply discounted on the eShop, so why should players expect anything different from Mario + Rabbids: Sparks of Hope?

That’s not to say that Sparks of Hope isn’t worth the full MSRP price — it’s just that we know Ubisoft will cut it in half (or more) sooner or later.

Today, Mario + Rabbids: Sparks of Hope sits at an 86 on Metacritic, so it’s hard to say it’s a critical failure. The only failure here, I think, is Ubisoft’s expectations.