Get Ready for Next Weekend’s Splatoon x Pokémon Splatfest 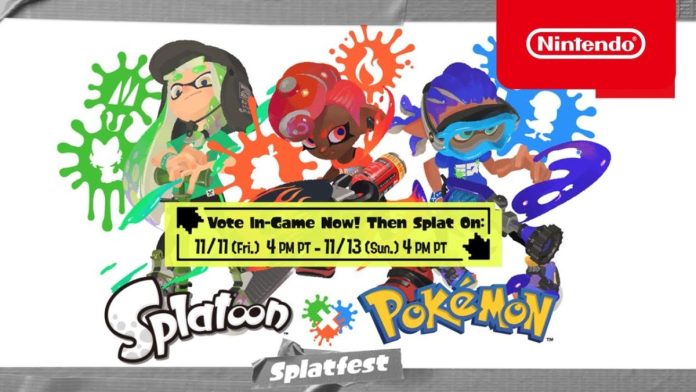 Voting for next weekend’s Splatoon 3 Splatfest has begun, and team selection is open now! The upcoming Splatoon 3 x Pokémon event lets players pick their favorite Pokémon starter type to celebrate the release of the next generation of Pokemon games, Pokémon Scarlet and Violet.

There’s a new stand in the center of Splatsville Square where players can vote for their team and the starter type they think is best. Selecting a team will give players the special Splatfest t-shirt for that team which can only be worn during the upcoming event.

The Deep Cut Trio have also announced the teams they’ll be representing in the Splatfest. Shiver is Team Grass, Frye is for Team Fire, and Big Man is naturally a supporter of Team Water.

The My Nintendo Store has also been updated in North America to include a keychain set to celebrate the Splatoon 3 Splatfest crossover event. Nintendo unveiled some new, unique items last month, but they were only originally confirmed for release in Japan through the My Nintendo Store.

The set includes three unique keychains with designs themed around the three new starter Pokémon for the upcoming release of the ninth generation of Pokémon. Each keychain is 2.5” x 1.75”, making them a decent size to display the silhouettes for the new starters: Fuecoco, Quaxly, and Sprigatito.

The physical reward can be grabbed for 550 Platinum Points from the My Nintendo Store. It does have a shipping fee, and it’s unclear how limited the supply is.