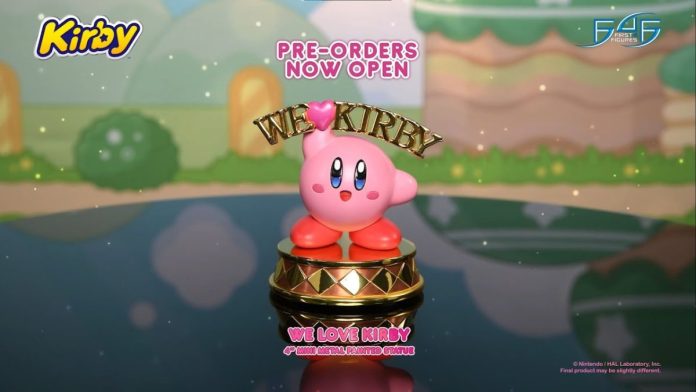 Despite 2022 coming to a close in just a few days, Nintendo and HAL Laboratory are still celebrating Kirby’s 30th anniversary. This time, they’re celebrating with a brand-new metal painted statue from First 4 Figures, the first of three statues that will be released next year.

The first Kirby statue, including the base, is a little over 4 inches tall, almost 4 inches wide, and weighs 1 kilogram.

As announced on Twitter, the first Kirby variant is now available to pre-order. Preorders for the silver and gold variants will begin a little later. The original variant is the classic pink Kirby holding a “We Love Kirby” sign above his head while standing on a gold platform. This statue is expected to release in Q2 2023.

Based in the United Kingdom and Hong Kong, First 4 Figures is known for its premium collectible (and licensed) figurines of some of the most popular franchises. In the past, First 4 Figures has produced high-end figurines for other Nintendo IPs like Super Mario, The Legend of Zelda, Metroid Prime, and more.

Thankfully, the new Kirby statues from First 4 Figures are cheaper than their usual creations. The standard edition of First 4 Figures’ Mario and Yoshi statue, for instance, will set you back $499.99. But early birds can preorder the Kirby statue for $65.99, but they will later increase to $76.99. It’s unclear how different the pricing will be for this statue’s gold and silver versions.