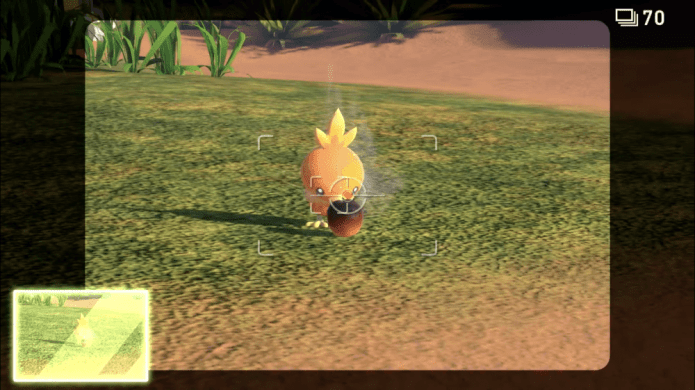 New Pokemon Snap takes you to a previously unexplored region: Lental. Lental is an archipelago that has lots of different environments, from dense jungles to vast deserts.

At just over a minute and thirty seconds, this trailer packs a punch.

In the trailer, you see a male trainer walking into what appears to be a kind of Safari Zone. (Does the trainer’s backward hat remind anyone else of Silver, Gold, or Crystal?) Inside, he gets his camera.

From there, you see a female avatar start a hovercraft pod — the NEO-ONE — and venture into the wild area. It’s a safe bet that you’ll be able to choose between the male and female trainer avatars — like Let’s Go, Pikachu and Let’s Go, Eevee — but giving us some additional customization options would be awesome.

The trailer shows a wide variety of Pokemon from all eight regions. Some are sleeping, some are playing, some are fighting. There’s one really nice shot of a Torchic roasted an apple.

There’s another scene with a strangely glowing Meganium appearing in what looks like a marshy area. According to the Pokemon Company, when you’re not taking pictures of Pokemon, you’ll be investigating the mysterious Illumina phenomenon, unique to the Lental region.

Lental has its own Pokemon professor, too: Professor Mirror. Professor Mirror asks you to venture out for an ecological survey, and he will evaluate your photos, too. You’ll get higher scores for interesting poses, your composition, and more. You’ll also be responsible for studying the Illumina phenomenon.