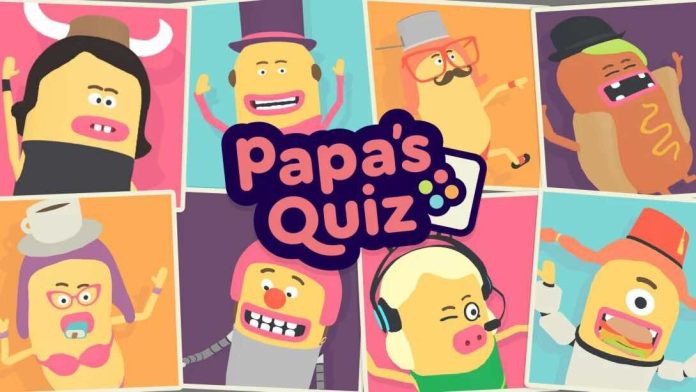 Part of the Nintendo Switch magic has always been its local multiplayer games.

Sure, playing online is great, but there’s something special about gathering around the TV for some couch co-op… or a little friendly competition. Maybe that’s why Old Apes’ latest game, Papa’s Quiz, feels right at home on the Switch.

I got a sneak peek at Papa’s Quiz for the Switch, and I was really impressed with it. With its huge number of categories, quirky art style, and simple controls, Papa’s Quiz is the ultimate Nintendo Switch trivia game.

Even though Papa’s Quiz was originally released on the PC in December 2020, this fun, quirky, and family-friendly trivia game feels like it was made for the Switch. (Old Apes’ CEO Olov Lindberg has mentioned that the team built Papa’s Quiz with the Switch in mind.)

Papa’s Quiz includes more than 2,500 trivia questions across 185 different categories and lets up to eight players go head-to-head to prove who’s the smartest person in the room.

Getting started playing Papa’s Quiz couldn’t be easier. You can play with a Joy-Con, or you can use your cell phone. When you open the game, a unique QR code and game code appear on the screen, allowing your friends to scan the QR code and use their phones or tablets as controllers. (Your friends won’t be able to use Joy-Con drift as an excuse for losing again.) You don’t have to download any apps to your phone to play — it all happens in the browser.

The “Basic” controller mode gives you four buttons that correspond with the four multiple-choice questions for each trivia question. When you think you know the answer, you just click one of the buttons. The faster you answer the question, the more points you get. Personally, I think Papa’s Quiz is most charming when it’s played as a party game — you know, with people in the same room. But one of the awesome things about this trivia game is that it gives you the option to play with people over the Internet.

In the “Enhanced” mode, all the game’s information — including trivia questions and the multiple choice answers — is shown on your device’s screen, so anyone can join in on the fun.

Customizing your avatar is a fun way to pass the time while everyone’s joining the game. You can change your avatar’s hair, hat, eyes, face, and clothes and give them a quirky name from a series of preloaded random words — my first character’s name was “Magic Man.” The game shows four random categories, and each player taps their buttons to move a single cursor over the category they want. It’s like a little minigame before the trivia game even begins. After five rounds, you enter a lightning round. In this final round, each player has their own timer. If you answer questions correctly, you get more time on your timer. But if you answer them wrong, you lose time. The last player standing wins!

In keeping with the game’s dance party aesthetic, the winner gets to choose a dance for their character to do. It’s a nice touch and gives this trivia game a lot of personality.

If you’re looking for a straightforward, easy-to-play trivia game on the Nintendo Switch to test your brain — or your fingers — check out Papa’s Quiz. It’s available on Nintendo’s eShop now.