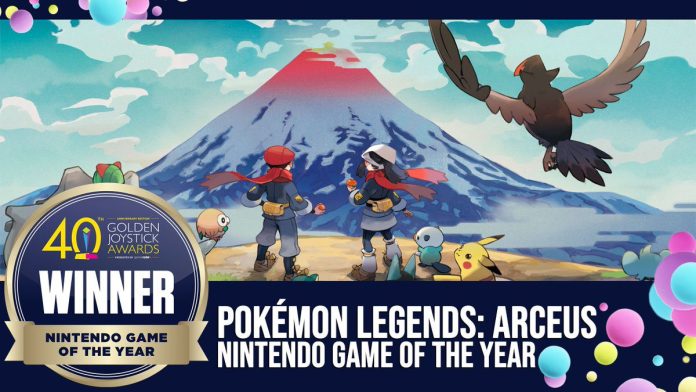 The 40th Golden Joystick Awards was held yesterday, and Nintendo nabbed a few Golden Joysticks. Unsurprisingly, Elden Ring was crowned the “Ultimate Game of the Year,” Nintendo wasn’t totally squeezed out this year.

For the Nintendo Game of the Year category, Pokémon Legends: Arceus claimed victory over other popular titles such as Xenoblade Chronicles 3 and Splatoon 3. This is a great victory for the Pokémon series, but as the comments on the Twitter announcement show, not everyone is pleased.

Elden Ring picked up three trophies and beat various Nintendo titles across the categories, but there was one big win for Nintendo.

The Legend of Zelda: Tears of the Kingdom, the upcoming sequel to Breath of the Wild, claimed the crown for “Most Wanted Game,” which might not seem too surprising, but it was up against some steep competition. Tears of the Kingdom competed against other highly anticipated titles such as Starfield, Spider-Man 2, Dead Space, and Hogwarts Legacy.

Sadly, this means that Xenoblade Chronicles 3 didn’t win anything at the 2022 Golden Joysticks despite being nominated for multiple categories. These awards are voted for by the general public, and considering the mass popularity and undeniable quality of Elden Ring, which is available on multiple platforms, it’s easy to see why the game dominated.