Should You Play Super Mario Bros. 35? 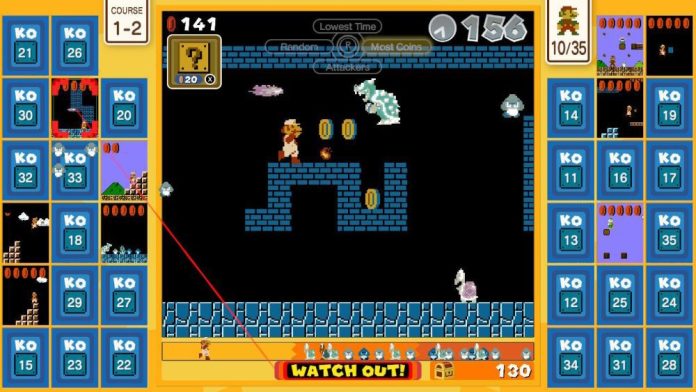 It’s hard to believe that Super Mario Bros. has been around for more than 35 years, and Nintendo made some big announcements last year to celebrate.

Super Mario Bros. 35 came out last October, and this review is super overdue. But if you haven’t gotten around to playing it or if you just got a Switch around the holidays, now’s the time to experience Super Mario Bros. 35… before it’s too late.

With Super Mario 3D All-Stars, if you purchased a physical or digital copy of the game, obviously you’ll be able to play it whenever you want, but Super Mario Bros. 35 is a free-to-play game through the Nintendo Switch Online service.

That means once it’s gone, it’s gone. (At least that’s what Nintendo says.)

How to Get Super Mario Bros. 35

At its core, Super Mario Bros. 35 is the original NES Mario game that you’ve played — and probably purchased — multiple times on different consoles. Your basic moves are the same — you use the D-Pad to move, Y to run, and B to jump, but now you can also press X to use spend the coins you’ve collected to purchase a power-up.

The biggest difference between Mario and this new version is how you win. Super Mario Bros. 35 is a game of survival. As you’re playing, you’ll see a timer in the top right corner of your screen. Every time you defeat an enemy, you get time added to your timer. When your timer hits 0 seconds, you’re out, so it pays to defeat as many enemies as fast as you can.

As you defeat enemies, they’ll be sent to your opponents (and you’re receiving your opponents’ defeated enemies), making it harder for them to complete their courses. Just like Tetris 99, there are four attack modes that allow you to strategically target your remaining opponents: random, lowest time, most coins, and attackers. If you choose to target attackers, for example, you will send your defeated enemies to the opponents who are currently targeting you.

You don’t progress through worlds in a linear way. Instead of progressing from 1-1 to 1-2 to 1-3 and so on, you may replay the same course multiple times. More on that later.

Super Mario Bros. 35 is an absolute blast to play. It breathes new life into this 35-year-old classic game and gives you an excuse to revisit it. Competing with other players online also adds an interesting challenge, making every world, in every playthrough, unique.

While Super Mario Bros. 35 is a fresh take on the classic NES title, there are only so many levels to play through, and if you’re playing with other skilled players, the battle can drag on and repeat the same courses — particularly 1-1 — multiple times. Yeah, there are new enemies that can disrupt your normal flow through the level, but if you’re playing multiple battles, things can get repetitive.

So will Nintendo actually remove Super Mario 35 in March? It’s hard to say. It only takes a few seconds to matchmake with 34 other players, so it’s safe to say that the game is still very popular, but if you’re even minimally interested in challenging yourself with this free-to-play Mario game, give it a shot today!