Exploring the Pixelated Terror of Uncanny Valley on the Nintendo Switch 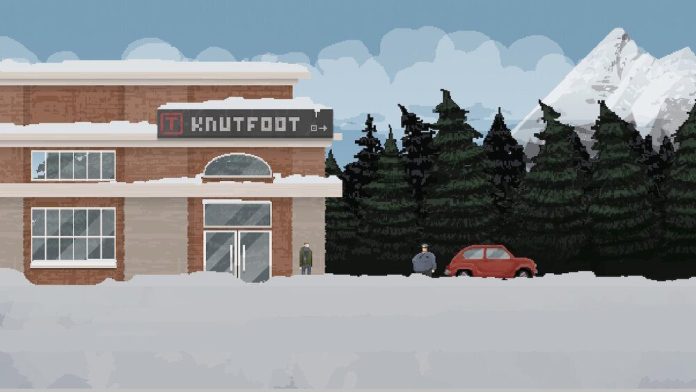 I appreciate the deep scares. The creepy scares. The psychological scares. The scares that become the first thing you think about when you wake up in the middle of the night and stare into the darkness around you.

That’s why I was so excited to finally play Uncanny Valley for the Nintendo Switch. (Jump scares, after all, don’t lend themselves to Uncanny Valley’s pixelated art style.) Originally released for the Switch in December 2018, UncannyValley is a gory 2D side-scrolling indie horror game that looks like it could have been released for the Nintendo Entertainment System in the late 1980s.

The music combined with the creepy setting gives you a spine-tingly feeling as you walk down the dark corridors of the abandoned Melior factory, making Uncanny Valley a can’t-miss and one of the best scary Nintendo Switch games on the eShop.

What is Uncanny Valley?

From a psychological point of view, the uncanny valley represents the eerie feeling you get when you see an object or an image that appears to be almost human but missing something indescribable. It’s the sensation that something’s just not right, not quite human. Lots of things can give us this feeling: robots, mannequins, even corpses.

The indie survival horror game Uncanny Valley centers its story — well, stories — around the uncanny valley effect. As you enter the relatively small world of Uncanny Valley, you’ll immediately notice that something just isn’t right, something’s out of place, and something isn’t adding up.

You play as Tom, and for the first few minutes, all you know about him is that he suffers from night terrors. As you play through the story, you slowly start to piece together what brought Tom to this eerie ghost town.

Uncanny Valley opens with Tom starting his new job as the night watchman at an abandoned factory called Melior.

When you arrive at the train station, you meet another watchman, Buck, who trains you. On your first day, Buck shows you around Melior and explains your new responsibilities before sending you to your new apartment to put on your uniform.

On the ground floor of the apartment building, you meet Eve, the building’s caretaker. She greets you and tells you where your room is before getting back to her caretaking duties. Once you’ve gone up the elevator, visited your apartment, and put on your uniform, you head back over to Melior for your first shift as the night watchman.

Each night’s shift lasts seven real-world minutes. During your seven-minute shift, you can explore the factory, reading emails, and listening to taped conversations to slowly piece together why the factory closed. Or not. The choice is yours.

At the end of the shift, Tom gets sleepy, and if you don’t get back to your apartment fast enough, Tom will fall asleep wherever he is. And when Tom falls asleep, he enters a night of terror. At certain points in the game, it eventually got hard for me to determine where the real world ended and the night terror began. Tom’s night terrors are full of shadowy figures, corpses, and hopeless dead ends, but as you play through them, you slowly start to unravel Tom’s backstory.

Before becoming the night watchman at Melior, Tom was a police officer who witnessed a murder that scarred him and ultimately put his life in danger.

The gang responsible for the murder had paid off the other officers at Tom’s department, and Tom’s identity has been compromised. The gang’s after him. The police chief tells Tom he has to run away to save his own life, which brings Tom to Melior.

Over the course of your first few nights on duty, you are asked to figure out puzzles, unlock doors, find secret passages, and try to understand why the factory suddenly closed down. While you don’t actually have to do anything, the choices you make impact the overall story and the gameplay, what the developers call their “consequence system.”

If you choose to find and listen to the recorded tapes, you uncover that Melior was creating artificial intelligence before it shut down. In the tapes, you hear a conversation between a doctor and an unnamed woman who we can assume is an android. The woman’s voice is cold and strange, even as the doctor questions her about an incident involving the death of a Melior scientist, Jim.

There’s Something About Eve

As you explore the depths of the factory, you might feel alone at first, but you quickly find yourself face-to-face with skeletal androids, and they’re ready to attack. You can hide from them or fight them, but your resources are extremely limited. During my first playthrough, the androids caught me before I could escape. Then, they brought me to Eve.

Eve shackles Tom to the wall before cutting off his arms and legs, one by one, so that he can’t run away anymore. She doesn’t want him to hurt himself anymore.

Looking back, you can see signs of the twist. The first time you meet Eve, her character sprite doesn’t move naturally as the other characters do. She stands completely still. The way she speaks is oddly mechanical. Even her name, Eve, is a biblical reference to a new woman, someone who was made from a previous creation.

If you find the sixth and final tape, you’ll hear Eve explain that she hates feeling lonely, but she’s just fallen in love with someone new, and she’s activated other androids. This tape is dated a few days after your arrival….

Peeling Back the Layers

Uncanny Valley is one of those rare games that gets better every time you play it.

My first time through, I was utterly confused when Eve cut off my arms and legs. What happened…? Did I lose…? Maybe I won…?

Ultimately, peeling back the layers of the story through multiple playthroughs, making different decisions every time, is what makes Uncanny Valley so satisfying.

Think of an Uncanny Valley playthrough as a short story in a collection. You can finish one in a couple of hours, and when you return for another one, you could get a completely different experience.

It all depends on your choices and how deep you’re willing to go down the rabbit hole.