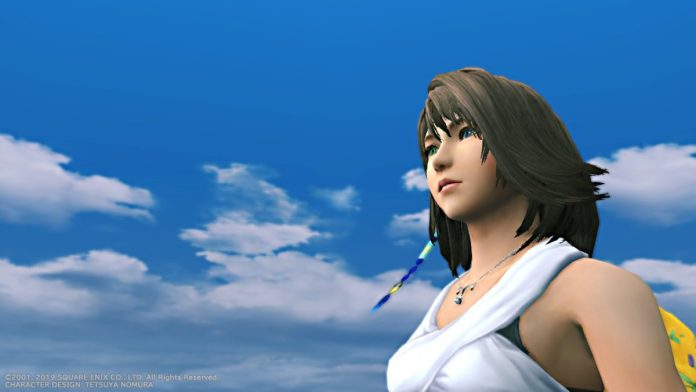 Personally, Final Fantasy X-2 took me completely off guard. I had no idea how we got from the first game to this, so I put X-2 down for years.

Final Fantasy X ends with Yuna and her team of guardians defeating Sin, ending its cycle of rebirth, and exposing the corruption and insidiousness of the Church of Yevon, bringing about the Eternal Calm.

So how the hell did we go from killing Sin and bringing down the Church of Yevon at the end of Final Fantasy X to Yuna leaving Besaid and… singing on stage as a pop idol during the intro sequence of Final Fantasy X-2? (Admittedly, this scene makes more sense a few gameplay minutes later, but….)

The short answer is a cutscene called Eternal Calm, also known as Another Story.

Set two years after Yuna defeats Sin and Tidus disappears, Eternal Calm sheds light on Yuna’s life after Sin was defeated and bridges the gap between Final Fantasy X and Final Fantasy X-2. But, if you played Final Fantasy X in 2001, you might’ve never seen it.

The Japanese release of Final Fantasy X came packaged with Eternal Calm, but the post-game cutscene didn’t appear in the North American release.

That’s right. There’s nothing you can do in Final Fantasy X to get this “true ending.” The file literally doesn’t exist on the North American Final Fantasy X disc. But there was a way westerners could see Eternal Calm.

SquareSoft distributed Eternal Calm to western audiences in December 2002 through PlayStation Magazine. Issue 75 came with a demo disc that included Eternal Calm as well as a demo for Final Fantasy X-2. Yuna, Rikku, and Paine, the heroes of Final Fantasy X-2, are featured on the demo disc’s art in a hand-drawn style reminiscent of earlier installments in the franchise.

But, unfortunately, if you didn’t have a subscription to PlayStation Magazine, it was difficult to get your hands on a copy of Eternal Calm.

Today, it’s a little easier to see it. SquareSoft packaged it with Final Fantasy X: International edition for the PlayStation 2 in 2002, it was included on the Final Fantasy X/X-2 HD Remaster in 2013, and it’s widely available on YouTube as well.

Eternal Calm is a 14-minute post-game cutscene that follows the conclusion of Final Fantasy X.

If you’ve never seen Eternal Calm before, it might be a little disappointing, though. It’s not a game, and it’s not playable. It’s just an extended cutscene. In fact, the cutscene isn’t even CGI. It uses the actual character models from Final Fantasy X.

As a setup for Final Fantasy X-2, it’s perfect. It gives players just enough information to bridge the gap between the first game and its sequel. But it’s important to remember that Eternal Calm was made before the team at SquareSoft decided to make a sequel.

Set two years after the defeat of Sin, Eternal Calm follows Yuna as she struggles to balance her responsibilities to the people of Spira with what she wants to do with her life.

Eternal Calm opens with Yuna holding her breath underwater, a not-so-subtle callback to her relationship with Tidus. Wakka, standing on the shore in Besaid, calls out to Yuna, congratulating her on her diving. The entire scene mirrors the first time Tidus meets Wakka in Final Fantasy X.

Yuna joins Wakka on the shore. Through their short conversation, we learn that Wakka hasn’t trained in a while, and Lulu is pregnant with Wakka’s child.

In Eternal Calm, we hear some of Yuna’s interior monologue. She talks about what the eternal calm means to hear:

In the next scene, we see Yuna in a familiar location: Besaid Temple. Talking to a citizen named Tasgio, we learn that many new groups have sprung up in the two years since the Church of Yevon fell.

Yuna worries about what’s going to happen next.

Next, we see Yuna walking down a familiar path in Besaid, one that the player walked down as Tidus near the beginning of his own journey.

Wakka catches up with Yuna and says that the old folks in Besaid want to see Yuna married. A few seconds later, Yaibal, a messenger from the Youth League, one of the groups established after Yevon’s demise, brings a message from his leader, Meyvn Nooj. He wants Yuna to join the Youth League.

Then, we see another familiar face: Rikku. We learn that Rikku visits Wakka and Yuna from time to time. She’s been traveling around Spira, salvaging ancient machina and teaching people how to use them.

Aboard Rikku’s ship, we learn that Kimahri, once Yuna’s guardian, has gone to Mt. Gagazet to teach orphaned Ronso. Rikku also presents Yuna with a gift: a sphere that Kimahri found on Mt. Gagazet.

Looking into the sphere, Yuna sees Tidus trapped in a cage. He’s talking to someone, saying that he won’t apologize because he hasn’t done anything wrong. He’s begging for someone to let him out of the cage. He says that he wants to see her.

Wakka questions if it’s really Tidus. Rikku’s not sure, but she wants them all to go on an adventure to find out.

Yuna feels responsible for the people of Besaid, and Wakka doesn’t want her to leave. He says that people depend on her, want to see her, and that she’s “booked” for the next three months. Rikku pushes Yuna to do what she wants, to follow her heart.

Ultimately, Yuna says she wants to go on another journey, but she worries about disappointing everyone if she leaves.

She hears Tidus in her head:

Thinking about his words, Yuna decides to go: “I’ll go. I know it’s selfish, but this is my story.”

Rikku’s excited and suggests a consume change that will disguise Yuna, given her celebrity status in Spira after the destruction of Sin.

Wakka, irritated with Yuna’s decision, leaves the ship to get Lulu.

Yuna asks Rikku to leave before Wakka returns to the ship with Lulu, and Eternal Calm ends rather abruptly, setting up the epic journey that would eventually become the story of Final Fantasy X-2.

SquareSoft and the team behind Final Fantasy X pack a lot in the 14-minute cutscene Eternal Calm, but it in many ways, it’s just an echo of the themes from Final Fantasy X.

In Final Fantasy X, Yuna’s entire life was a story of sacrifice, culminating in Yuna’s pilgrimage, the ultimate selfless act. She grows up knowing that, one day, she will have to sacrifice herself for the good of the world. Her role as summoner was pre-ordained. Her father, the high summoner Lord Braska, defeated Sin ten years earlier, bringing about the Calm that saw Yuna come of age. It was her responsibility to follow in Braska’s footsteps, even though she knew that summoning the Final Aeon and defeating sin would mean the end of her own life.

Tidus was the first person to make Yuna realize that there could be more to life than sacrifice. His (admittedly sometimes annoying) childishness and selfishness helped her ultimately banish Sin.

But even after freeing Spira from Sin’s destructive cycle of death and rebirth, Yuna still sacrifices someone close to her: Tidus.

Eternal Calm shows us a day in the life of the savior of Spira. She’s bombarded with requests from townsfolk, pressured to enter marriages of convenience, and feels stuck in Besaid.

Rikku’s arrival and call to adventure give Yuna a choice that she didn’t have in Final Fantasy X. When Rikku shows her the sphere and offers to help her find Tidus, Yuna can either stay in Besaid, metaphorically sacrificing herself to the townsfolk, or go after Tidus, doing something for herself.

By the end of Final Fantasy X, Tidus and Yuna’s roles have reversed. Tidus, the voice in Yuna’s ear that tells her to do what she wants, always fought against Yuna sacrificing herself to stop Sin, but when given the opportunity himself to free the world of Sin forever, he took it, completing his character arc. In Eternal Calm, Yuna is given another chance to stand on her own and reject the wishes that other people project on her.

Just as in Final Fantasy X, Wakka and Rikku are at odds.

Wakka, narratively standing in for the now-defunct teaching of Yevon and the traditional trappings of the Church, attempts to force Yuna to be quiet and fulfill her official duties. On the other hand, Rikku encourages Yuna to be selfish, to be true to herself. But the choice, ultimately, is up to Yuna.

Luckily, she chooses selfishness and becomes the protagonist Final Fantasy X-2 needs. She follows her heart instead of sacrificing the rest of her life for Spira.